That Time We Drove Through New Mexico

It took me an hour to realize we were completely lost, and it took Rick another to admit it. In our defense, driving through New Mexico was like one orange mesa after the next, and the tumbleweeds catapulting toward our pristine rental were rather distracting (to Rick at least, I was busy keeping score. It was worth ten points when one exploded in the grill, sending him into an acute tizzy.)

Men are strange, I found, driving through a barren desert with one. God… he was practically a stranger… but you know, young love…

Finally, we pulled into a gas station on the left, leaving behind a cloud of red dust in Rick’s furious and abrupt parking (he then panicked because he didn’t realize it would do that.) We had lost signal a few miles past Roswell, and just prayed they might have internet here. At least then we could get our bearings, and Rick could obsessively detail the car after fueling up. It was half past noon, and blaring hot; and the huge white arrow out front promised ice cream and hot dogs. 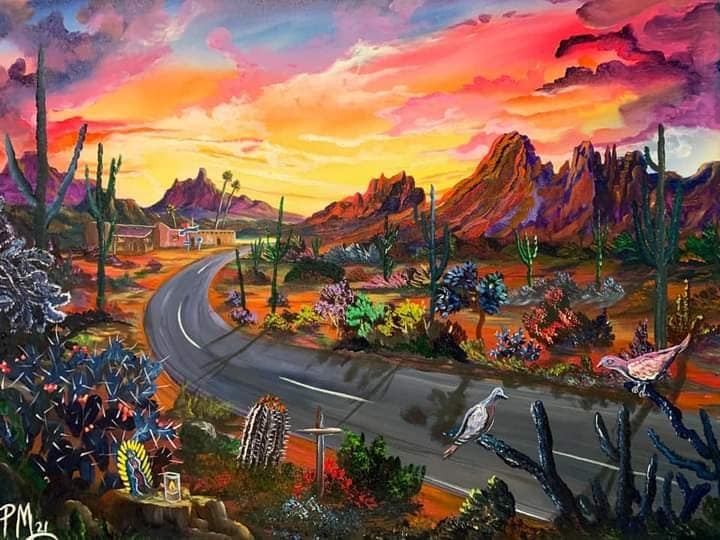 The store seemed smaller than it looked on the outside, but every nook and cranny crammed to the top with souvenirs, camping equipment and basic supplies. Rick argued with the attendant about the lack of WiFi, as I sauntered off towards the ice cream bar, a bit mortified to hear the older gentleman attendant ask,

Rick got very quiet and suddenly joined me for ice cream with a large state map tucked under an arm.

“Have you seen this thing?” he asked, throwing it down on a small table to claim a spot (despite the empty store.) “I’m gonna need Google just to decipher it.”

I got two scoops of mint chocolate chip; Rick, a chili dog. He crinkled his nose in disgust before attempting a bite, and complained about the price of a soda. Rolling my eyes had become a regular thing since we started this trip, and I wasn’t quite sure how I felt about that. Rick was a good guy, definitely. But he nitpicked every little thing, and I swore if he said one more negative quip I would march straight out and kick the car.

Then he did something cute, and I laughed and forgot what I was thinking about. We unfolded the map and after a few minutes failing to find our position on it, I volunteered to walk up to the attendant and ask him to mark the spot. The man’s peppery mustache flopped with an obvious chuckle, but he was nice and drew a red circle around the gas stations icon; then Rick and I scoured the map for clues about where we turned wrong.

With a fairly decent idea of where to go, we thanked the attendant and walked out to the car.

Pink clouds rolled over the distant hills and the horizon looked like melted butter, reminding me that I never actually ate anything. Was the sun setting already? How long were we here? I tried to piece together all we had done since stopping in, but Rick began grumbling loudly about some scratches on the driver’s tire rim– until I walked over and rubbed it off with a bit of spit and elbow grease.

He apologized and reminded me how stressed out he was, and of course I understood since we’ve now apparently lost half a day to being lost. We agreed to just get on the road and to our next motel peacefully and as soon as possible.

And then it happened, a sudden and bright flash of light– brighter than the molten sun dropping to its Earthly grave. We were both halfway into the car and then drawn back out slowly, in pure awe (or terror, if there’s a difference.) I’m telling you, the sky split right open. Like a lightning bolt tore straight through it and ripped it apart.

“Well, no, that does sound a bit extreme, doesn’t it?” I chuckle. “No, what we saw was a flying saucer. Yeah, it was metallic and so shiny it was almost invisible, but we could see it clear as day. It zipped up and down, and then out towards the nearest mesa. Hope it didn’t get lost.” I chuckle again.

“Yes, That’s right. I married Rick, go figure, and he raised two wonderful children while I pursued a doctorate in Biology. He was my rock.” I feel like smiling, and I do, I think. My eyes are closed and I can’t really feel my face.

“And then you went on to become an astronaut, and a leading pioneer to the first Mars colony.”

“Yes, that’s right. After what we saw, I never gave up the search for the beyond. Poor Rick never got to see me land on the red planet. He passed before I even accepted the mission.” I am suddenly overwhelmed, as if a lifetime of love for a man is converging into this very moment, and only now can I truly mourn his loss. Plus, it turned out his retentive ways rubbed off on me, and AmazoNASA absolutely requires attention to detail. Now I feel like smiling again. Why can’t I feel my face?

“It’s clear you are stirring awake, Julie. Go ahead and open your eyes.”

I do, and see that I am laying down on a white table. I wince in the flood of lights above me; but as my eyes adjust, the lights appear to be patterned like an intricate mandala. You know, like in one of those adult coloring books.

“Where am I?” I ask, groggy and confused. I can only move my eyes, and whoever else is speaking is just out of sight.

“You are here,” they reply. Come to think of it, the voice sounds a lot like Rick’s. “That’s all you must know for now. So please, let’s continue. Tell me about when you got to Mars.”

“Well, it went better than expected, really. With the invention of nano-shielding, we were able to build quickly and safely. I had a hand in the bio-farms, studying microbes, and— No! I’m not saying anymore until you tell me where I am and why I’m here!”

“Oh, you silly, wonderful human. You’ve answered yourself in your very question. You are Here, of course. And as for the why…”

I feel a touch on my hand– a soft caress across my thumb, just like Rick would. Suddenly the paralysis lifts and I sit up to face him. He looks young, like when we drove through New Mexico so long ago. Instantly, I know that “you’re not him.”

“No, I’m not,” he replies, smiling. “How very perceptive you are. I speak on behalf of a collective known as the Buh’ni. You, Julie, have been collected for replication.”

“Replication?” I echo with a gasp, unable to shake the idea that I’d been abducted by some alien race of humanoid bunnies for ‘replication.’ And you know what they say about rabbits…

Not-Rick begins to adopt some rather bunny-like appearances. Once he notices the long floppy ears, he chuckles and caresses my hand under his fluffy chin.

“No, I said the Buh’ni collective.” He laughs merrily. “Though what you see here is due to a perception overlay, it’s impossible for you to see me as I truly am.”

“And what do you want with me?” I ask, fully aware that I am either dreaming, accidentally tripping balls, or that I must have died in my sleep.

“I daresay it’s the latter,” bunny-Rick replied, “oh, sorry. You didn’t say that part out loud, did you?”

“Oh yes, very much so. But rejoice! As I’ve said, you’ve been collected for replication. The collective is always on the hunt for unique leaders. We travel the spheres searching for people like you.”

“So, you’re going to what, copy me? Upload me into some mechanical replica to live again?” I’m not exactly resistant to the idea of a new life…but I’ve seen all the movies, I know how this stuff goes.

“Something like that,” the man (or whatever) replies with a smile. He now is beginning to look like my father (or my brother, it’s hard to tell.) “Our species knows the value of strong leadership, and we are open to all methods of retrieval. And when we don’t find one, we farm them.”

“Farm them?” I ask, looking around for any exits, just in case.  It looks like your typical alien exam room, give or take a few probes and ray guns. There’s a door over on my left, then a corridor leading away to the right and out of sight. But it’s hard to trust anything I see. I mean, if this strange shapeshifting entity over here is just a visual overlay, how much of this room is an overlay as well?

“Ah, no need to worry about that now,” the entity replies with a firm wave of the hand. “Anyway, your physical body is expiring, along with its use. But in a way, you will be reborn and live forever as an honored citizen of my people. Now rejoice and be merry, for your resurrection is at hand!”

I suddenly feel quite drowsy and lay back down. I can’t go for the exit even if I want… the paralysis is returning, and it is getting hard to think clearly. “I don’t want to go back to sleep,” I say, though this body seems to act otherwise.

“I am so very sorry, Julie. But you must. Replication is a very long and intricate process, and we’ve merely begun. When you dream, know that you are being processed. And if you happen to wake up again, I’ll tell you anything you’d like to know. Now before we part, do you have one last question?”

It’s even harder to think– but as I drifted, the question came to me all on its own:

“Yeah, I do. That time we drove through New Mexico. Is that really a memory, or just a dream?”

I awoke with a loud snort. It was near two a.m. according to the dashboard clock, and we pulled into the motel, relieved and exhausted. Rick thought the grubby fingerprints on the office door was a gloomy sign of the potential state of our room.

God, please let this trip be over soon.

Justin Phillips
I’ve been a writer and vivid dreamer since childhood. Then in 2017, my dreaming experience changed to include lucid dreaming, false awakenings and OBE’s. Though I’m definitely not a dreaming master (I’d say more of an advanced beginner,) I crave exploration and hope to pioneer this field in any way possible.
Recent Posts

I've been a writer and vivid dreamer since childhood. Then in 2017, my dreaming experience changed to include lucid dreaming, false awakenings and OBE's. Though I'm definitely not a dreaming master (I'd say more of an advanced beginner,) I crave exploration and hope to pioneer this field in any way possible.
Observing the Self and Bearing Witness Piecing it Together

I loved this story…exciting, thrilling, inviting! 🛸👽

I love it too. It’s a great story and really goes with the art.

Thanks for sharing this Justin Phillips, I kinda got lost in it being a fiction during reading the article, so much rang true! Great story. Thanks.
Exciting to me.