The Light at the End of the Tunnel

I recently joined an online healing group. In weekly gatherings, we bring our intuitive energies together in service of others. During twenty minutes of silence, each member takes an inner journey to restore health to others. As my consciousness soars beyond the limits of my physical body during these sessions, I’m often surprised where I land. Allow me to share my experience.

I closed my eyes as the twenty minutes of silence began. Within seconds, I found myself standing near a well. I was surprised when I climbed up and stood on its wide stone ledge and looked down the throat of this deep well.

This is certainly not something I would ever consider doing in 3D. Teetering on the rim of a deep well—no thanks.

Without warning, I astonished myself as I dove headfirst into the darkness of the well’s shaft. A familiar feeling of timelessness engulfed me. As I drifted in that magical space of no time, I knew I had exited my physical body. There was just enough 3D awareness left to document the experience.

I slipped past the slick stony sides of the well. My head-first tumble into this cool, dark abyss was a familiar feeling. I’ve experienced enough of these travels that I’ve learned to go with the flow. I know a greater hand is at play here, guiding me in this divine experience.

I dove deeper, stretching until I reached water. I took a deep breath as I pierced the water’s quiet, silvery surface. The stony interior walls blurred past me as I plunged deeper and deeper into the abyss. I knew I had reached the bottom when I saw a stone wall jutting out from the wall of the well.

I grabbed the ledge, popped my head out of the water, and looked around. I was in an underwater cavern that intersected at the bottom of the well. Surrounded by darkness, the light from the waves danced like diamonds as it reflected light from the bright moon. 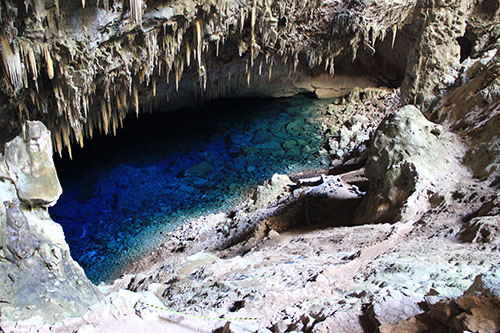 Automatically I inhaled deeply. During the dive, I had held my breath for longer than I thought possible, yet I felt no discomfort. I smiled at this realization and pulled myself up on this ledge and stood.

I shook the wetness from my body, and I began walking. Although I was barefoot, my footsteps echoed in the chamber of this cave. I didn’t know where I was headed, but I trusted I was going where I need to be.

After navigating a few twists and turns, I arrived at the center of the cave. I looked around. Although I expected to see someone—perhaps an angel or a guide—I only saw a stone slab altar built on top of large damp stones.

I gingerly approached this structure. It felt holy, so I walked toward it slowly and with reverence. It was covered with different sized framed pictures of people. I didn’t recognize anyone, but I intuitively knew they were seeking healing. 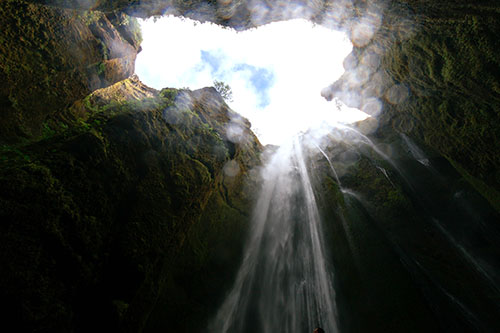 I followed my instinct to kneel and bow my head. The moment my knee hit the cool, damp floor of the cave, strong waves of energy washed over me. I knew these healing vibrations came deep within the bowels of this sacred cavern; it was energy from Gaia, the spirit of Mother Earth.

I had an intuitive knowing, and I understood the water from the well and cavern represented the emotional pain and suffering from the people whose pictures were on the altar. Some were depressed; others had anxiety. Some were slipping away from the reality of day-to-day life; they could not cope. They needed peace. They needed love. They needed healing.

The energy coursing through my body was powerful; it was from the very heart of Gaia. When I felt my body couldn’t hold any more of these sacred vibrations, I gathered the energy and sent it through my arms and out my hands in the direction of the pictures on the altar.

I raised my eyes and I smiled when I witnessed pastel pink and green ribbons of light weave and swirl among the framed pictures. From my past experiences with these colors, I knew the angels had arrived. They were here, helping bring these healing vibrations to those on the altar, to those who were in need.

I had an intuitive knowing that these angelic forces were combining with the energy of Mother Earth to alleviate the pain from these souls. As soon as I thought that these people must feel lost and isolated, I was corrected. These words entered my awareness:

They are not lost, of course. They are like a ship that veers off the given route. It can self-correct. It can veer back to its original path.

I found myself automatically taking deep breaths and exhaling even deeper. I had another knowing—that my breath, especially that forced exhalation, was clearing energy vibrations that didn’t serve them. These were energy frequencies that weighed them down, prevented them from seeing the light that surrounds them. I knew I was helping to clear the path to enable them to see.

A thought entered my mind: I wished these people could lift up their eyes and see what I see. As I raised my head, I was immediately transported. I was no longer standing in the cavern looking at the altar; I was treading water at the bottom of the well. I looked up and realized the sides of this cistern resembled a tunnel—and there was light at the end of it! I gasped. The light at the end of the opening was the bright luminescence of the moon. Time seemed to melt around me as I admired this light of the cosmos. Another message broke into my awareness:

The moon represents the divine feminine, similar to the feminine qualities of Mother Earth. The moon doesn’t give light; its light is birthed from reflection. As these souls come closer to the opening of the well, they will look up and see light. They will see that the light is for them—it is their light. They are the ones that can and will shine, lit from the divine spark from all that is.

As their hearts open, so will their eyes. The light at the end of the tunnel shines the way for them, lighting the path of wisdom.

With these words, my awareness returned to my living room, exactly where I had started the meditation. I realized the pictures on the altar stood as a proxy for thousands of souls. The combination of angelic and Earth energies would help those in need. I gave thanks for my experience and the messages.

As the healing group debriefed, my friend Donna described her experience as “Earthly yet celestial.” From a floating position above the Earth, Donna saw two huge angels helping us heal; one was hovering at the North Pole and the other at the South Pole.

I couldn’t help but smile at the similarities. She saw the angels at both ends of the Earth, and I saw them as they traveled through our planet to comingle their energies with Gaia. This confirmation validated our shared experiences. We often discount or ignore our true nature. We are powerful beings, capable of using our energy for many things, including healing.

We are not alone. Our path on this Earth is not a solo trek; our angels and guides accompany us. The end of the tunnel is lit for us; it is a beacon to show us the way. When feeling overwhelmed or stressed by life, take time to pause. Take a deep breath. Cast your eyes upward to see the light that shines so brightly at the end of the tunnel and remember: the light is for you.

Knowing Without Doubt Called To Service

Thats quite the experience. Thanks for sharing!

Thanks, Adrian. When we connect with Source, we can become such powerful healers.

It seems you are really on a mission Candie. It’s a beautiful and powerful out of body experience. You are a true healer both in your former training and now that you’ve connected to The Messengers. I hope you are feeling better too!

Many thanks, Vickie. It seems I’ve been swamped with physical ailments. The most recent: as of 5 days ago, I’ve been flat on my back with excruciating low-back pain. Having survived multiple spinal surgeries, I’m familiar with these debilitating states. What’s different now, however, is my larger perspective.

I now see these physical symptoms as just that–symptoms. I had a vision of a deeply embedded splinter that had worked its way to the surface. My physical challenges are like that splinter. Although I’m enmeshed in pain, it’s the pain of healing.

The pain associated with a splinter working its way out of your body is the pain of healing deep wounds. My body has been processing deeply embedded, ancestral injuries. Now when I feel the pain, I thank my body for the wisdom of releasing and relinquishing these energies that no longer serve me…or my ancestors.

Wow! That’s a lot to go through! It’s all happening at one time too. You are much braver than I am. I am thinking of you and hoping you get through it all.