Greetings to every reader!

My name is Adrian, I live in the capital of Hungary, in a suburban area, with small forests and parks.

That’s where my story takes place. I was fascinated with the idea of Bigfoot since childhood even before the internet. Then few years ago I found a few YouTube channels about Bigfoot which piqued my curiosity again. I especially liked the  “Utah Sasquatch” channel.  In one of his videos he made a tutorial on how to find Bigfoot. One of his recommendations was to go to places where they have been sighted.

Just for fun I checked if there were any sightings in Hungary, and to my great surprise, I found a few.

One of the sightings was exactly at my area. Of course, at first, I thought someone made a joke, but I went to the forest anyway to see if there are any signs of them there. And there was, just as I’ve seen at Utah Sasquatch channel, I found 6 stick structures on my first try, here are a few of them.

I kept an eye on the forest for a few years and structures like these appeared and disappeared regularly. Not all structures are this complex. It can be as simple as a stick leaning on a tree. Over time as I gained experience, I noticed that these can appear outside the forest as well, in nearby parks. Shortly I realized there are many Sasquatch enthusiasts around the world who found the same thing to be true, the notion that Bigfoot can only appear in the remote wilderness is clearly false. Suburban areas with small forests and parks can suit them too. I showed the forest to a few people and some of them were able to find these kinds of structures in different parts of Hungary as well as England and Canada on their own. I went on some field trips myself to different places, and most of the time found something. Most researchers agree these structures are a clear sign of their presence in an area. To be able to find these almost anywhere shows they are not rare. 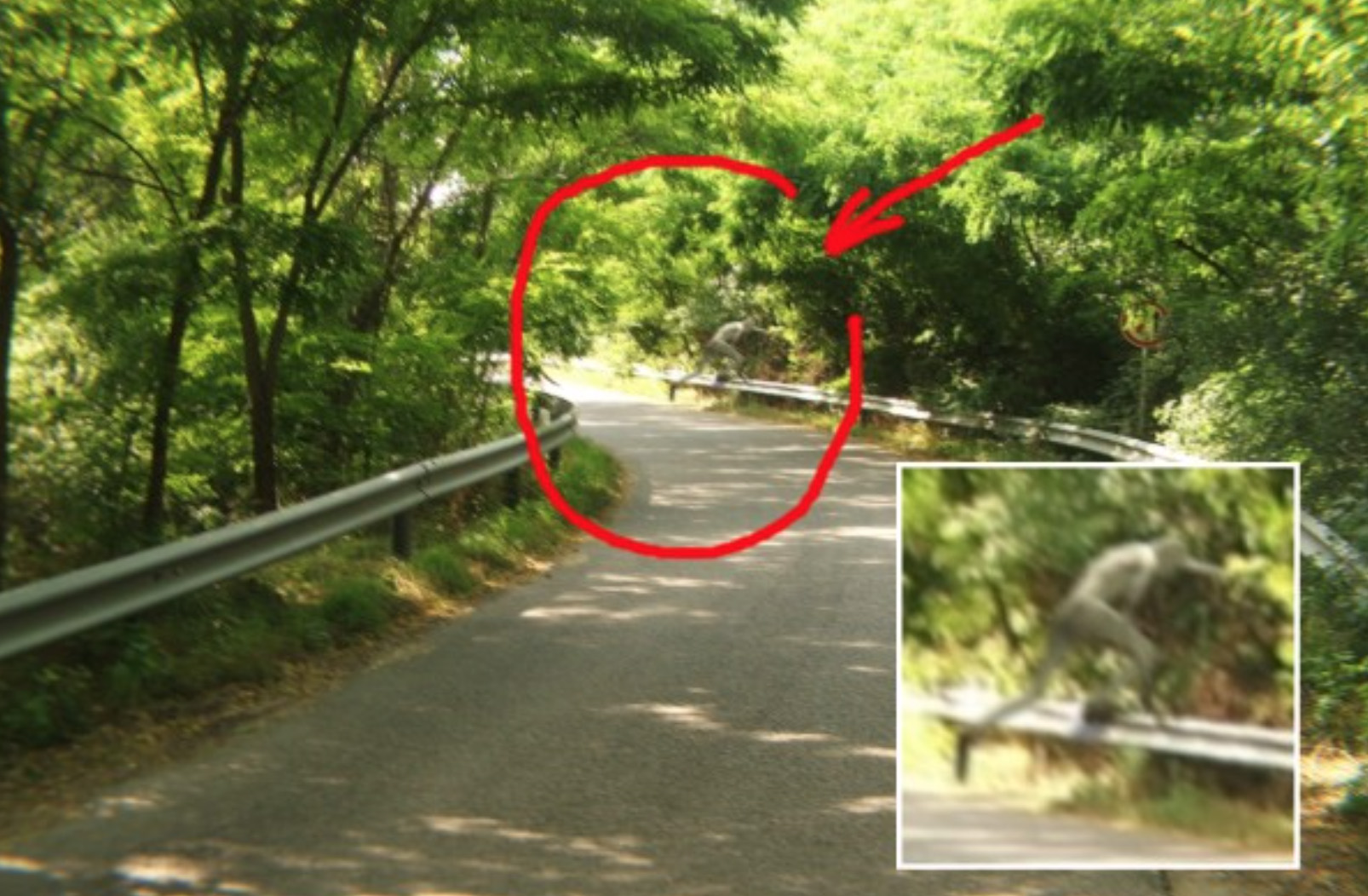 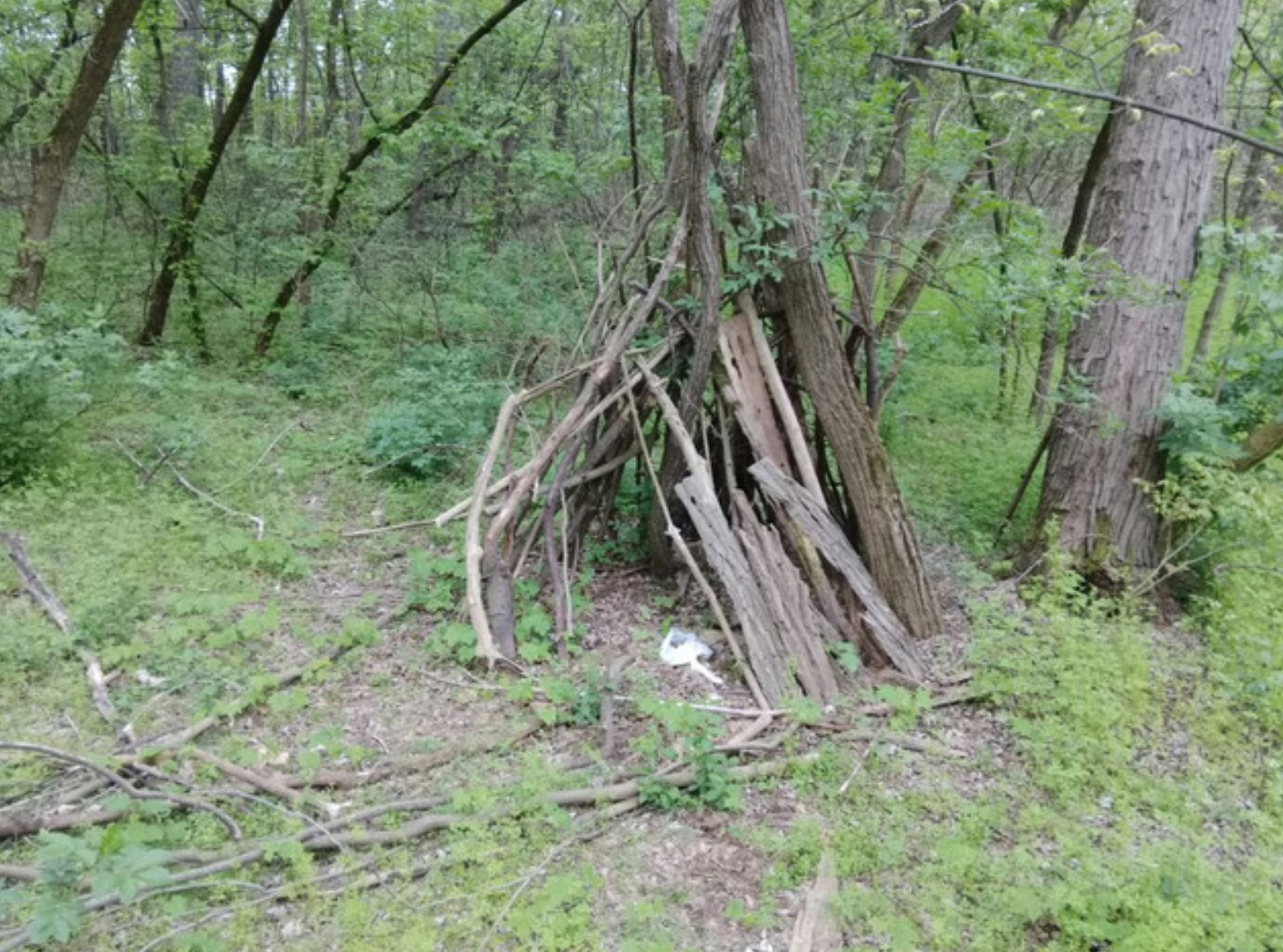 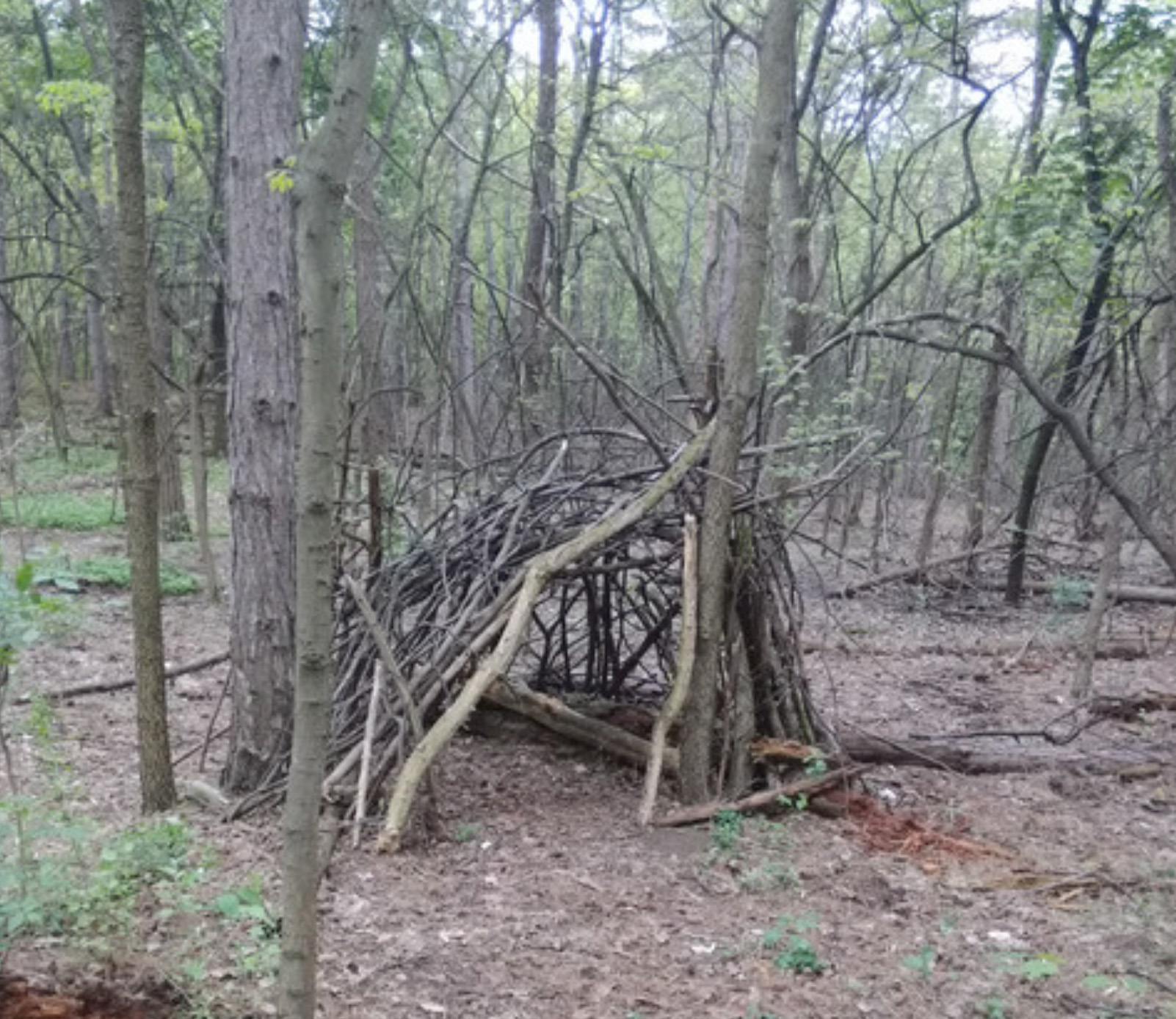 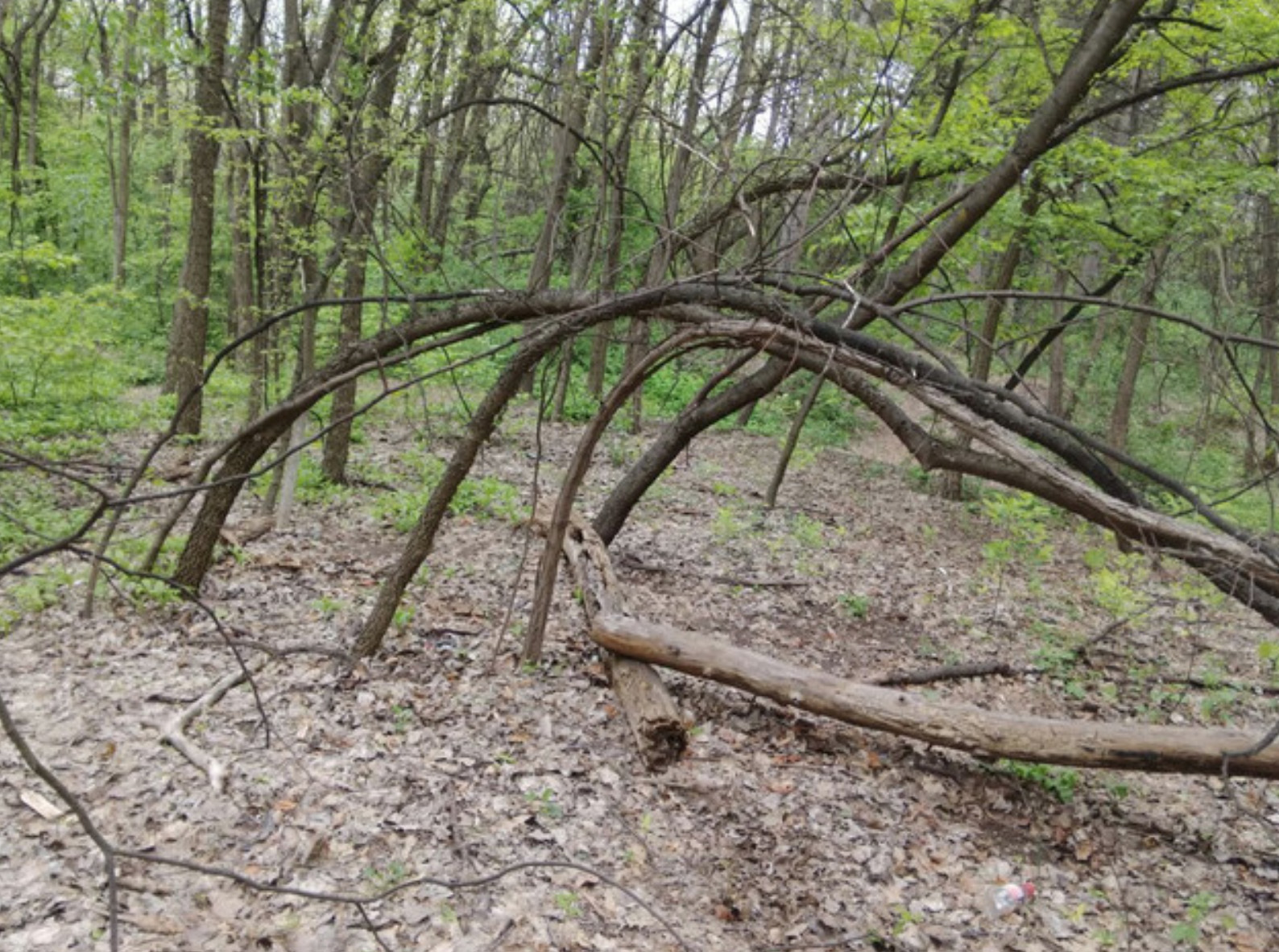 Another thing that started to happen is that I noticed strange occurrences and weird coincidences during this period. Later I found that others noticed these too in their area, so it seems appropriate to mention it here. Once I went to the forest with a guy I know. He was with a bicycle, I showed him some of the structures, and there was one of them deep in the forest. He had to leave the bike behind. When we returned a stick was leaning on his bike. I don’t think it could have occurred naturally. I also told him that sometimes, they make small X-es on the ground with two sticks. I even made one to show him. The next day I found 3 X-es on the ground which weren’t there the day prior, but these were at the park at a spot where I regularly stop. I also noticed a pattern whenever I went out to the forest to check for stick structures. The next day I usually found some ground symbols or stick structures, not in the forest, but at places I walk through during the day in the park when I go shopping or at the bus stop when I go to work or next to our home. I brushed it off the first few times, but it happened repeatedly.  It’s more than coincidence I thought; it is an interesting phenomenon. When I stopped going to the forest these incidents stopped too.

I found a great article online about them, by Joan Ocean. She was talking about them being telepathic and having other abilities. While reading that article my neck was touched from behind, but there was nothing there. It freaked me out. I found an experiencer online, her name is Cindy Carter, she was willing to help me with advice. The night before I talked to her, I had a dream about Sasquatch. The second I saw the creature in the dream I heard a loud scream and woke up. There was a postcard next to my pillow.

“Greetings from Budapest” was written on it. It probably fallen from the shelf but something like that had never happened before and also the timing was really strange.

Cindy introduced me to a practice she called heart light meditation. I did it in the forest each morning for a few weeks at the same spot. Then one morning this stick structure appeared close to my spot. Nobody knew what I was doing. It could be just a coincidence of course. 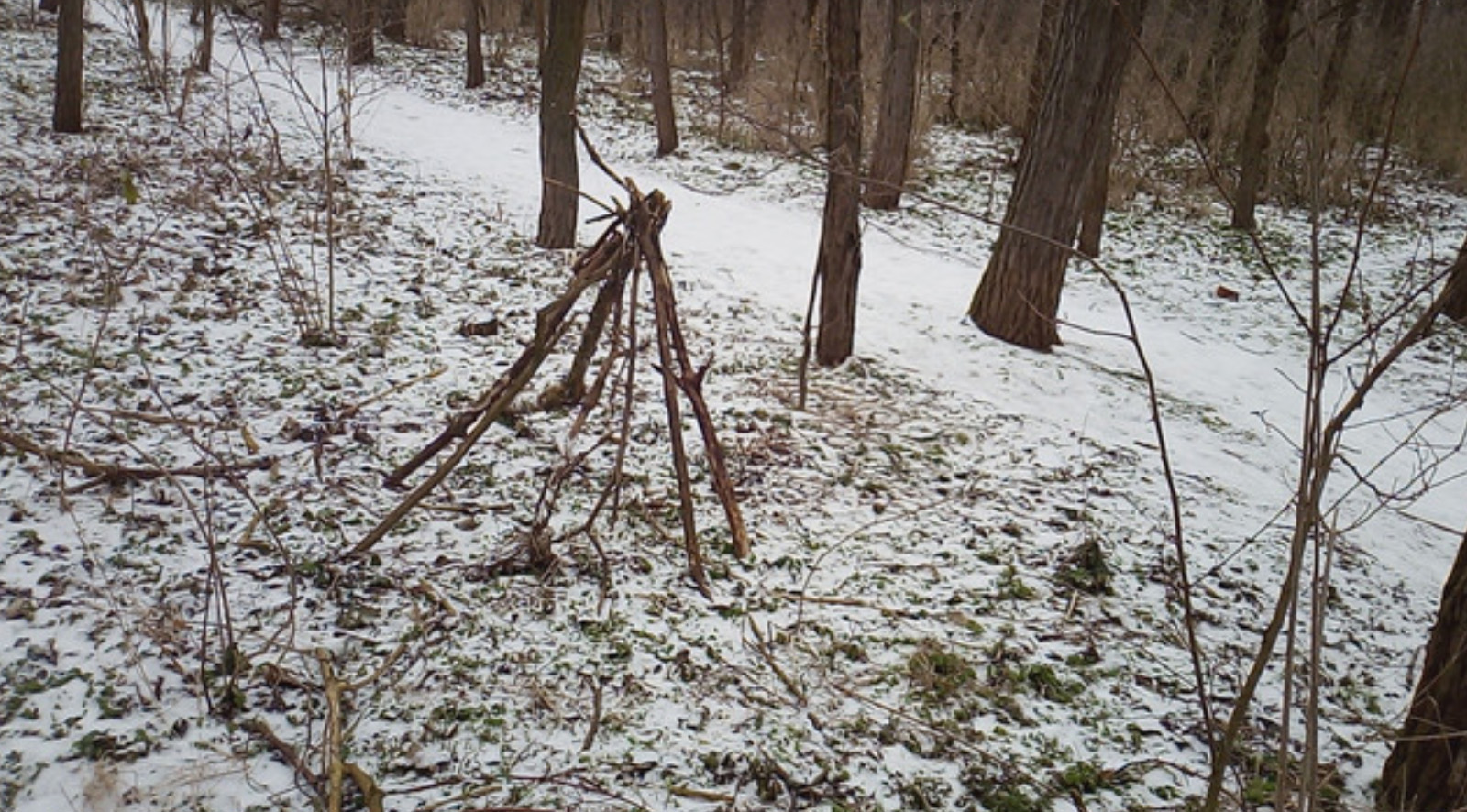 In March 2020 I tried a new approach. I talked to Vickie, who made this website, she showed me some rocks she received from them. That made me try an experiment. I found a new structure in our park. There was this broken concrete piece next to it.  I choose it to be the gifting place. 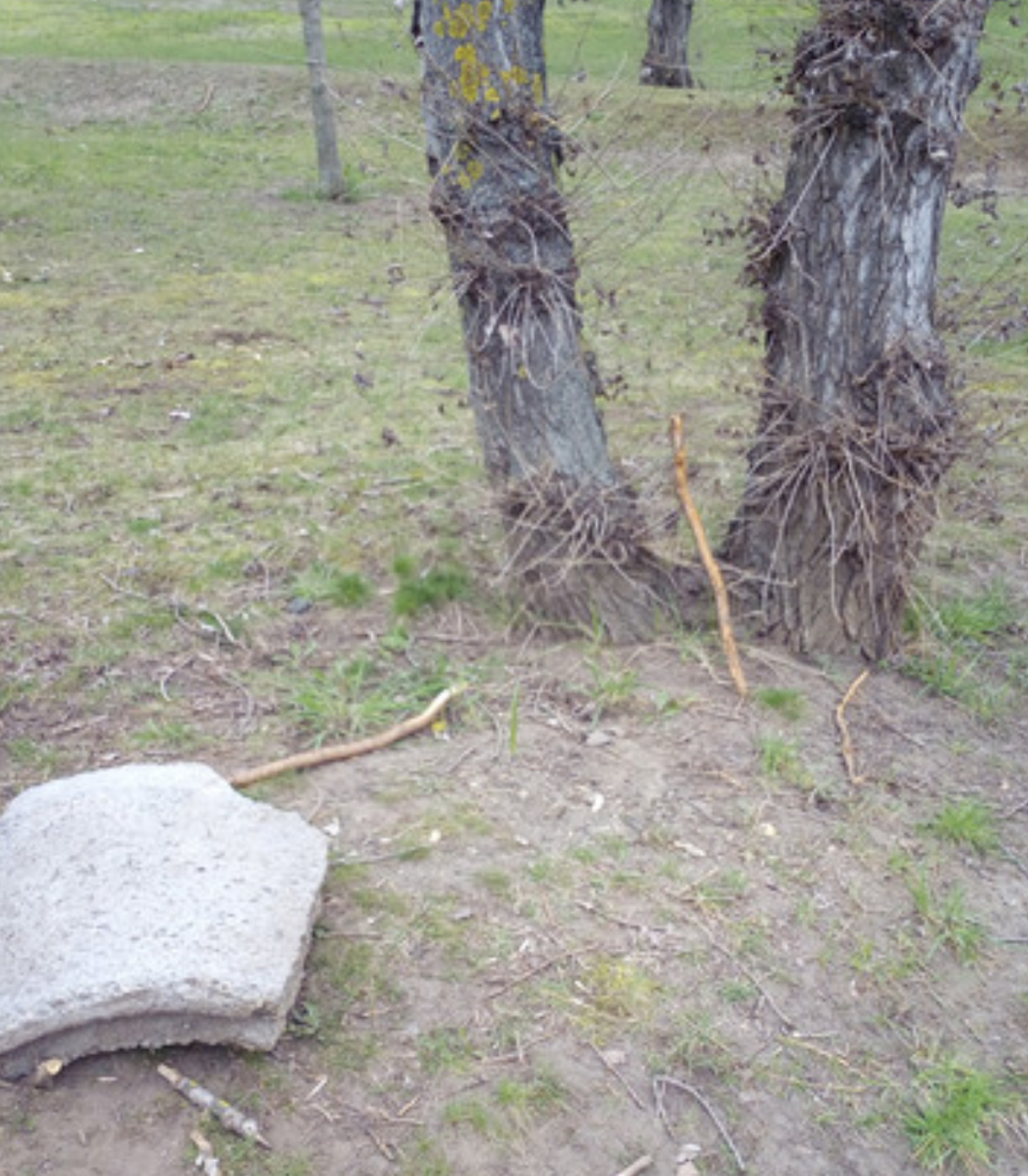 The idea was that I place something there, hopefully they will see it and take it. I placed a black crystal at night and to my great surprise and amazement the next morning I received a different black crystal back!! 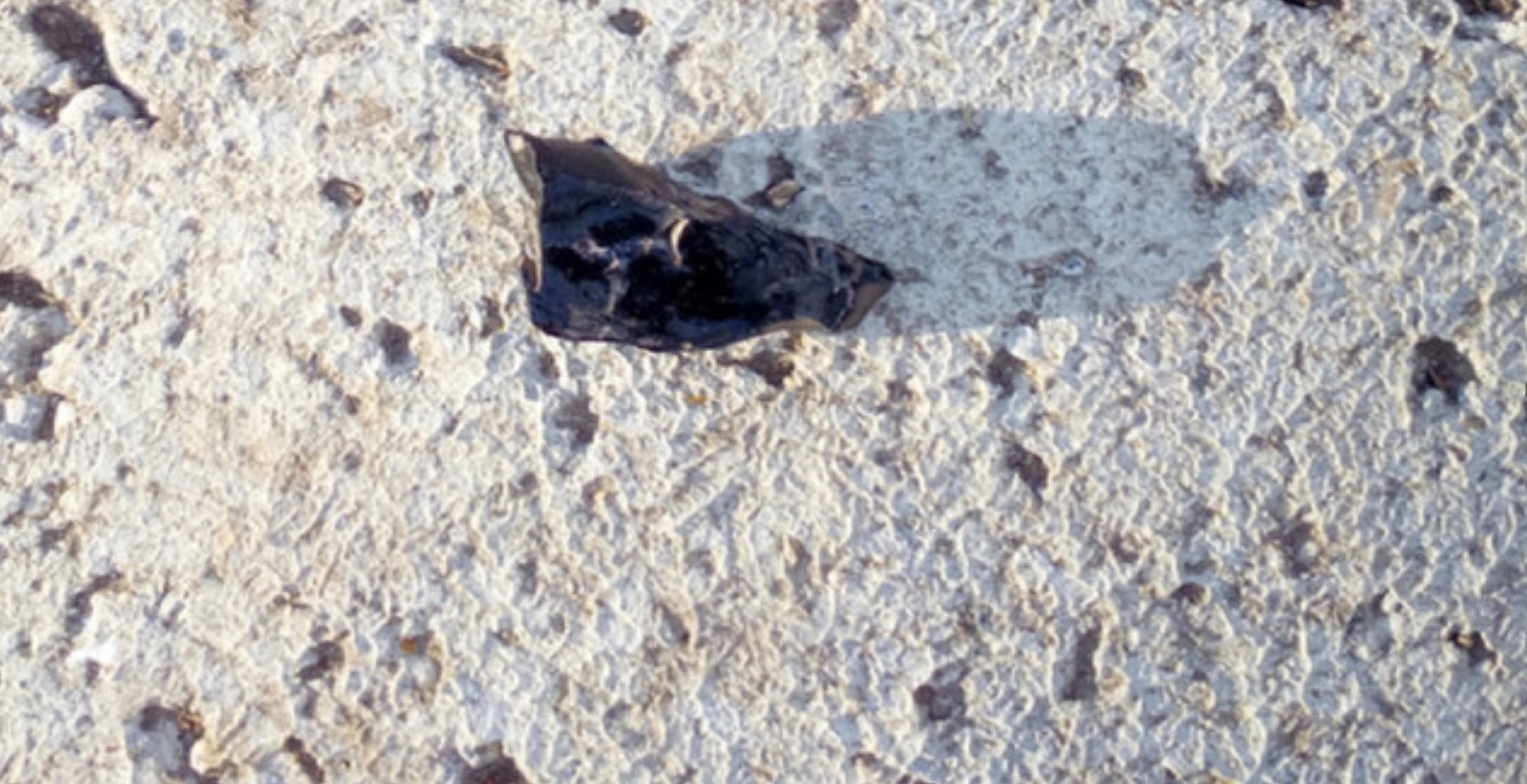 Whoever put it there had only one night to respond and it was black color just like mine. I placed more things there the following nights and, in the mornings, followed, I received 3 more of these. I placed there a drawing for 2 nights with a human stick figure and a Sasquatch. Some days later I found this (below) at the gifting place.

It seemed artificial and I had the thought it might have been an attempt to make a stick figure. 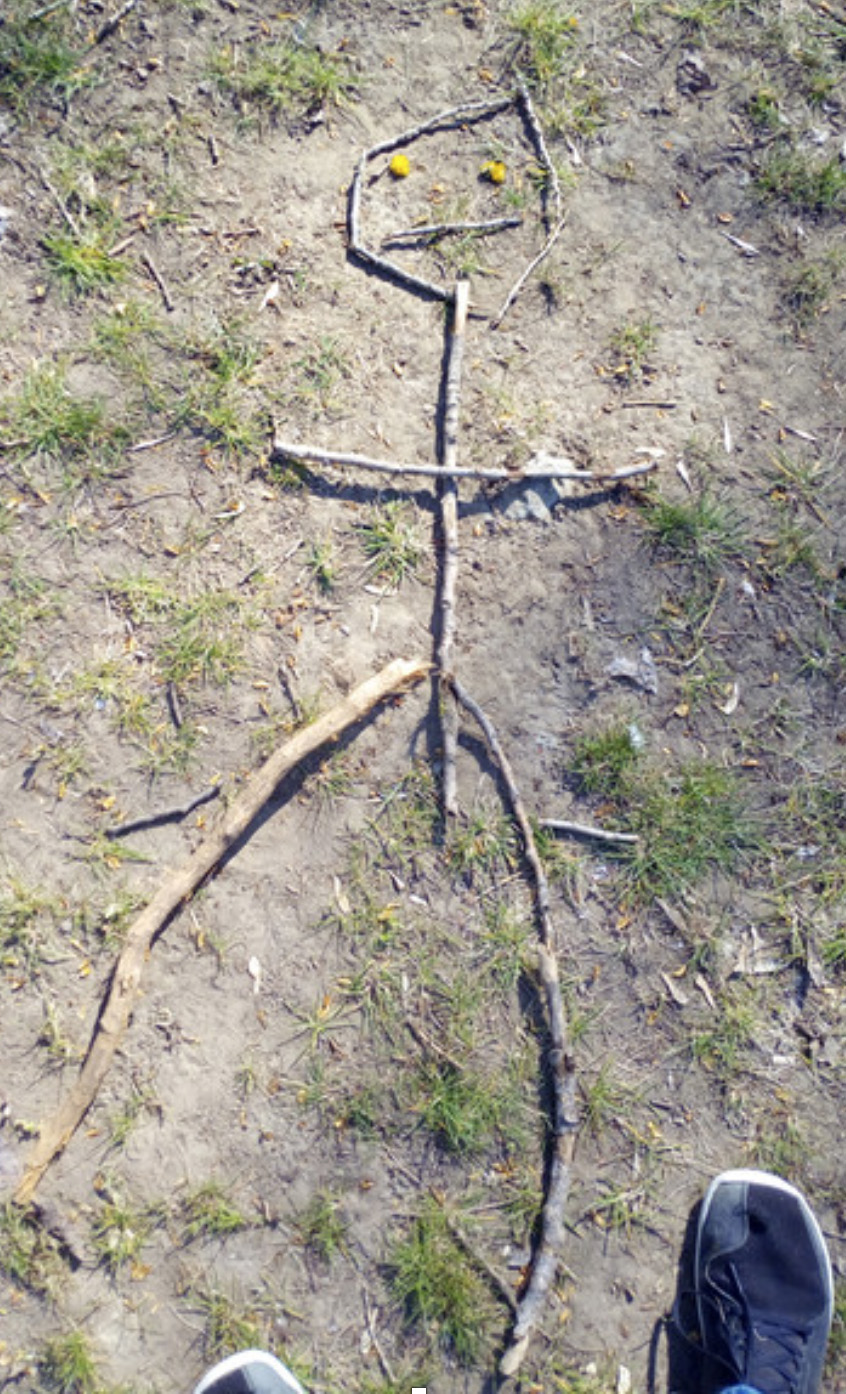 Then a few days later I got this above and it’s obviously a stick figure.

Could it have been made by a human? It wasn’t there at night and I was the first person there in the morning. Also, received another crystal the same morning. This is my rock collection from them so far:

It is difficult to make this experiment as there is always the possibility of human interference in my area. That gives them perfect plausible deniability. I try to minimize the chance of human interference by, placing the gifts at night, and check the place in the morning before anyone was there. However, more things have happened. I placed a feather at the gifting place and the next day my mother found a feather during her daily walk and gave it to me not knowing that I gifted another feather. She never did this before.

I placed a dandelion flower and the next morning I found 3 dandelion flowers at the front door of our building. I mentioned to Vickie the idea of communicating with paper circles. I came up with the idea that if there are many small paper circles than any kind of shape can be created out of them. In hindsight it sounds stupid, however next day I found this near the gifting place: 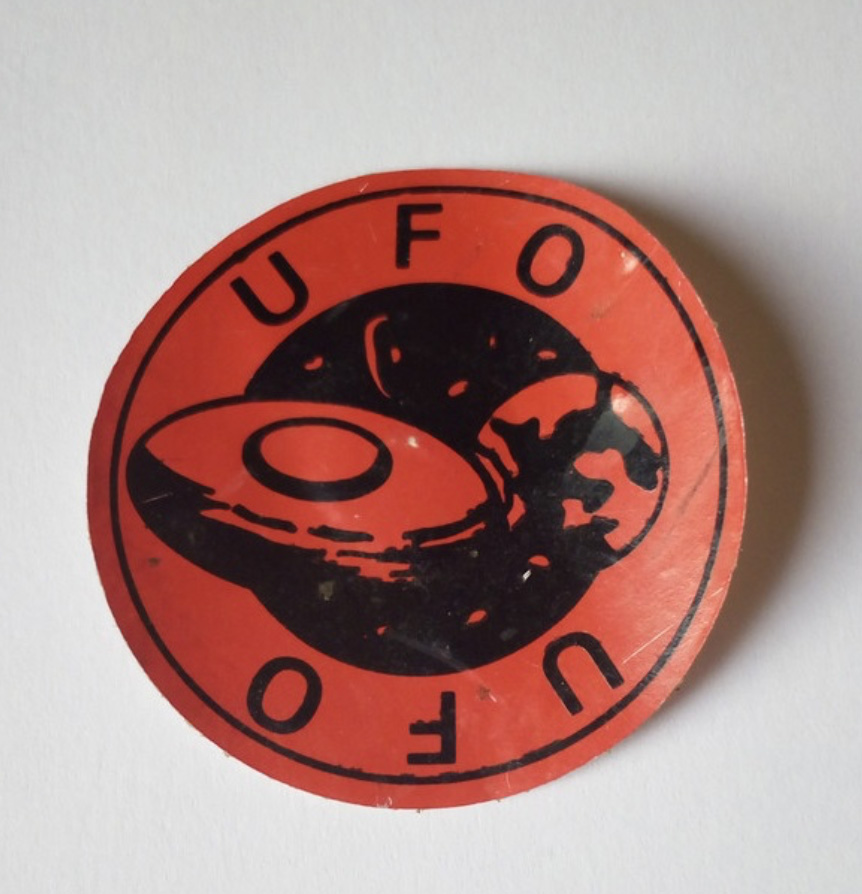 A paper circle!!  Strange isn’t it? Just one day after mentioning it. For me it was just too big of a coincidence to be a random occurrence. Then next day another paper circle: 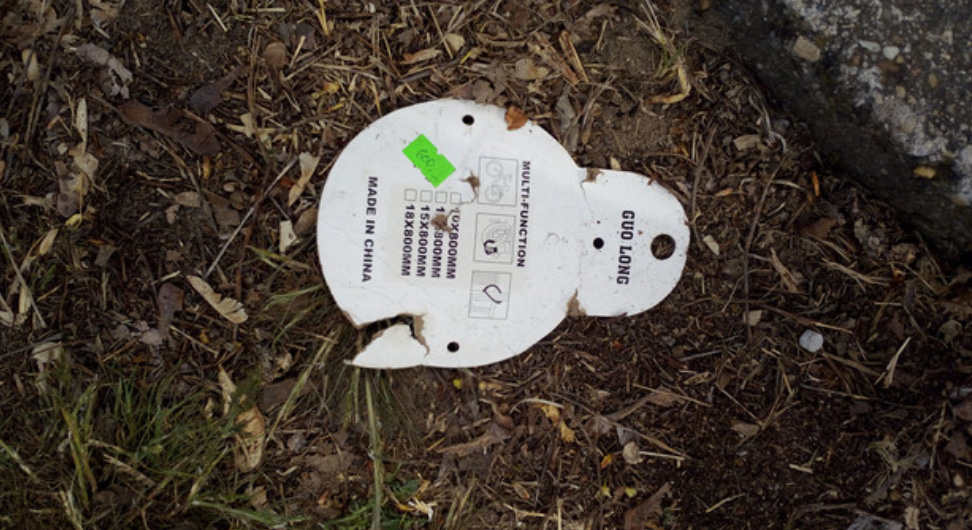 It might be a sign of telepathy, as I haven’t placed any paper circles myself. There are more examples. What I noticed is that they pay attention to what I gift and try to do something similar in a way I don’t expect.

As you see guys it’s not that hard to make contact with Sasquatch. You don’t have to be psychic to try it, just a willingness. They are all around the world and even if you live in a city it may not be a problem. I know a few cities where they can be found. They have abilities that are hard to understand for modern humans so they can stay hidden even in a suburban environment. I’ve talked to 2 people who have seen them disappear in front of them.

If you need help in this, I’m open for communication.

It might be a sign of telepathy, as I haven’t placed any paper circles myself. There are more examples. What I noticed is that they pay attention to what I gift and try to do something similar in a way I don’t expect.

As you see guys it’s not that hard to make contact with Sasquatch. You don’t have to be psychic to try it, just a willingness. They are all around the world and even if you live in a city it may not be a problem. I know a few cities where they can be found. They have abilities that are hard to understand for modern humans so they can stay hidden even in a suburban environment. I’ve talked to 2 people who have seen them disappear in front of them.

If you need help in this, I’m open for communication.

Update 2020 December:   I did another round of gifting a week ago at a new place. I placed my gifts and wondered if I will get back anything from them.I have found 2 possible gifts at the front door of our building, the next morning, but I’m not entirely sure it was from them. I wondered if I get anything more tangible. Then the next day, I found this on my table, in my room:

Adrian
Adrian
Adrian is an author on Sovereign Abilities. He is currently living in Budapest, Hungary
Recent Posts
Adrian

Gifts from a Sasquatch

I’m anxious to hear more of the story!