Definition of Maya (ma·ya /ˈmīə,ˈmäyə/) noun
IN HINDUISM – the supernatural power wielded by gods and demons to produce illusions.
IN HINDUISM•BUDDHISM – the power by which the universe becomes manifest; the illusion or appearance of the phenomenal world.

In part one, Pyramids And Crop Circles; Lessons In OB. I visited the Great Pyramids in Egypt in an out of body state and explored pyramids and crop circles and the message they have always given humankind:

I reached an altered state very quickly then separated and left my physical body to rest. I found myself high over Mexico and down below was thick, green jungle. The ancient pyramids of the Mayans are spread all over Mexico and found in other places as well.

My intent was to find out what happened to the Mayan people, that mostly disappeared, and to understand how the Mayan pyramids and artifacts tell the same message as the Great Pyramids and artifacts in Egypt do. They all say that the 5000 year mark has past and every civilization before us has reached this point, and well beyond, but were destroyed at around the 5000 year mark of their civilizations because of the destruction to the very planet that sustained their physical lives. We are at that point in our timeline, once again.

Long before history went down another timeline, when the Mayan people understood their inner selves, they were incredibly knowledgeable, not only with the keeping of time, but with the full understanding of their connection to Universal Consciousness.

They understood; “As Above, So Below” 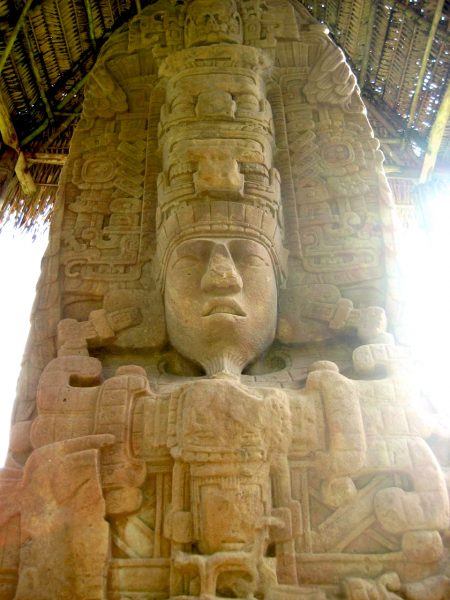 The man depicted in the Mayan carving above is connecting to his subconscious. He is using a copper device against both sides of his head and shown above his head, are his connections to his other selves; to the, All There Is.

As Above, So Below is clearly shown in this carving. This time the head on top is upside down showing the connection to subconscious. On both sides of the face there are hands that have dropped gears. Gears represent time. The entire carving is telling a story. It’s saying, The time is near. Connect to your subconscious. The feathers, always present in these Mayan carvings, represent flight. The ancient Mayans were clearly telling us that their timeline was over and they would soon be leaving this realm.

The Mayan people left carvings, pyramids, and even a very precise calendar to make sure we understood that the 5000 year mark has once again come. The timelines would meet on the date depicted on this calendar. The date marked on this calendar is, December 12, 2012. Can you see how precisely the face at the center of the calendar has been destroyed? This was done intentionally to cover the message and cause confusion about the calendar’s meaning. Just as the pyramids of Egypt have been purposely destroyed enough to hide the message they once gave, the Mayan artifacts have also been destroyed enough to hide their meaning too.

This hand-carved wood artifact is depicting a common man. He was once holding an obsidian mirror. The Mayan people used highly polished mirrors made from obsidian to look within their own subconscious.

From Wikipedia: “The use of mirrors in Mesoamerican culture was associated with the idea that they served as portals to a realm that could be seen but not interacted with. Mirrors in pre-Columbian Mesoamerica were fashioned from stone and served a number of uses, from the decorative to the divinatory.

At the time of the Spanish conquest this form of divination was still practiced among the Maya. In Mesoamerican art, mirrors are frequently associated with pools of liquid; this liquid was likely to have been water.”


Look closely at the hands in the picture above. It’s clear that, just like the wood statue, this carving also depicts a man that was once holding a mirror in his hands. He was once showing others how to see into their own subconscious. By his headpiece and jewelry we know that this man is not a common man.


Here are the hands close up. They were carved to hold a mirror.

The Mayan Calendar is one of the most important artifacts on the globe. It tells us that the 5000 year mark was over on December 12, 2012. Our current chaotic times were foretold to the Mayan people.

They knew what was ahead for their own culture and way of life. They knew their time had come to an end in this realm. They became a culture divided. The ones who had continued living a conscious life wanted to leave the earth realm. They left the Mayan calendar and all other artifacts as clues, and shortly after, the chaotic times that they were shown in their mirrors began.


This pottery has a carving of a Mayan God as he flies in his alien ship. The ship itself is the full face of an extraterrestrial. He has birds on both sides showing he is in flight. There are two small hummingbirds sipping nectar at the top sides of the craft. Their fast wings give lift to the ship. The Mayans that had continued living a conscious life left us clues like the pottery above to show us that they left this realm.

The Mayans had been in contact with extraterrestrials for all of time. They understood the message of the worldwide pyramids and crop circles.

The Mayans that had not wanted to be a part of what was coming to the Mayan culture were gone by the time the Mayan leaders began taking slaves as seen in this carving. Mayan life had become a life of sacrifices and war. The leaders were treated as gods and they lost all their connection to consciousness.

The true end to one of the most knowledgeable and brilliant civilizations on the planet came, as predicted, before the Spanish conquered the Mayan people. Just as the first people of Atlantis lost their inner knowledge, so did the modern Mayans that followed the new rules and laws of their conquerors.

In the year 1790, Mexico City proudly displayed what they called the Sun Stone at the Plaza Mayor. The Mayan calendar was known to be important although the people of those times thought it was a sun stone. They didn’t understand its significance and the face at the center was already destroyed as we see it today. Its true meaning was lost amongst the modern culture thriving in Mexico City.

Johann Saloman Hegi painted, Paseo de las Cadenas in the year 1851. The Mayan Calendar is just to the right of the ash tree. The calendar hung in the square telling the story of the end of life as we know it and the people thought it was depicting the worship of the sun.

In my out of body exploration I visited each pyramid and artifact, in the images above, that I had saved on my laptop. I visited them, not in a museum, but as they were once placed when the Mayan people first created them.

Early this morning I opened my laptop to look at the Mayan pictures and could remember, and understand, the meaning of every single picture. They told a story. Each picture had many clues and I fully understood the Mayan connection to all other pyramids on the planet.

This afternoon I learned that in 2011, the Mexican government had agreed to let a filmmaker make a full movie documentary called, Revelations of The Mayan, 2012 And Beyond. Under strange circumstances, the documentary was never made. The documentary would have provided real answers about why the Mayans mostly disappeared, their connection to worldwide pyramids, and the Mayan connection to extraterrestrials.

Preview of the documentary here

At this point in our timeline (year 2020), as the original Mayans had predicted, we are still deep into chaos on the planet. Humanity has been lead down a very dark path. In our modern culture today we think of ourselves as being refined but we are still at war, still sacrificing innocents, still destroying the planet and still in the dark about our true nature. This was the very warning given to humanity from the Mayans. All civilizations that reached this point in their own times couldn’t turn it around. They had come much too far down the dark path and didn’t remember how to get back to the light. We are at this very point.

Here is a method to look into your own subconscious. It’s similar to the one used by the ancient Mayan people to look within.

Astral Projection, Out of Body

Twas The Night Before Christmas…

The Shift from Noticing to Phasing